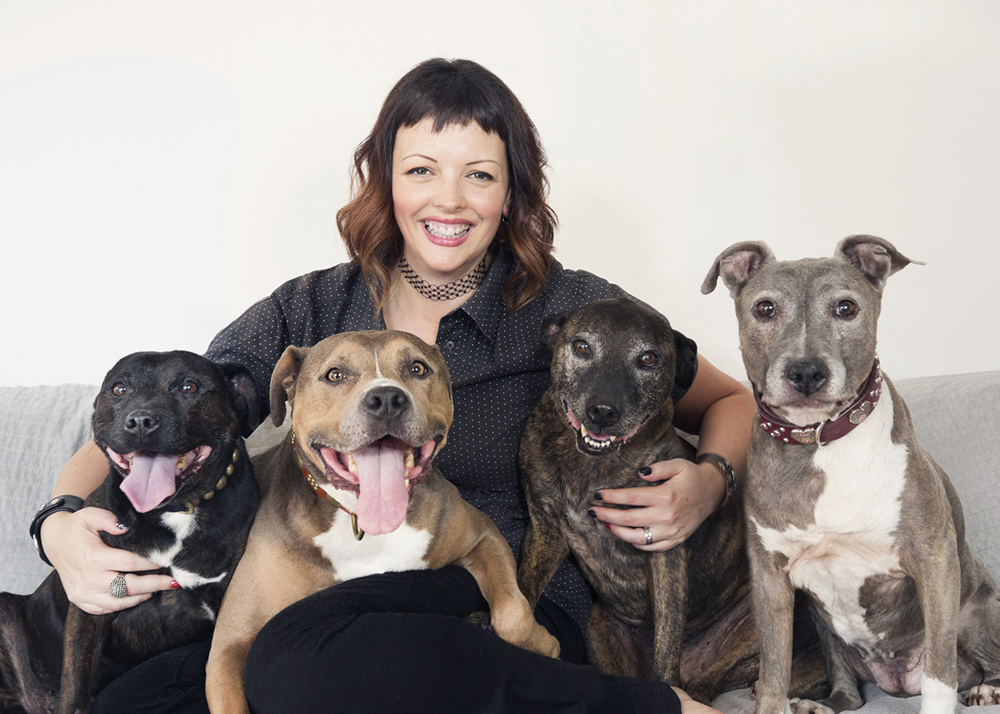 I’ve always been an animal lover.

Some of my earliest memories are of time spent playing with our neighbour’s Yorkshire Terrier, Sparky. There was a massive panic one day when I couldn’t be found because I’d gone next door to hang out with him! I know we owned two dogs of our own – Boney M and Elkie Brooks – because there are photos of me with them, but I was too young to remember our times together. The majority of my formative years were filled with cats. At one point my Dad bought a pedigree Burmese and started taking her to cat shows. (Or maybe that’s a dream, because it’s just SO out of character for him!)

After high school I did a visual communications degree at the Dublin Institute of Technology, specialising in photography and graphic design. In between third and fourth year I did a summer of waitressing in San Francisco, where I saved like crazy to buy my first automatic SLR. I spent every spare moment of my twenties in my darkroom at home developing rolls of film and making colour and black and white prints, in between working as a graphic designer.

I moved to Australia in 2004 and set about creating my perfect life, which at the time I thought would include a Yorkshire Terrier puppy and a Burmese kitten. Naturally my husband had to have some input into this perfect life – and he did, in the form of a seven year old Husky named Ivan. I was still determined to get a lapdog when I came across a rescue Staffy called Angel. I instantly knew that my lap and all 16kgs of this nuggety mischiefmaker were made for each other.

Shortly after we adopted Angel we decided to foster Chopper. He quickly won us over and before we knew it we were a three dog household. I was amazed at the immediate rush of love I had for these dogs. I’d never felt anything quite like it, it’s hard to describe. I’m sure I don’t need to try though – you know exactly what I mean. They’re my family.

Like any self-respecting new parent I needed to document all of their antics. I was frustrated by the shutter lag on my point and shoot camera so I bought my first DSLR. Chopper is a camera ham. I loved taking photos of him and he loved the attention. My passion for photography was reignited. With a full house we decided against owning any more dogs (that didn’t last, by the way), but I still wanted to help dogs in need. I began volunteering my time to photograph rescue dogs for their adoption profiles.

It’s an amazing feeling when the new owner of a dog whose adoption photos I took says my pictures are the reason they wanted to meet the dog in the first place.

This was my perfect life – Australia, dogs, photographing pets – and in 2008 Ruthless Photos was born. It’s the ideal fusion of my passions and I genuinely love what I do. I still volunteer and take adoption photographs, and now I offer my personality capturing skills to pets who already have owners too!

I’ve spent over a decade photographing both shelter dogs and client’s dogs. It’s taught me how to work with all breeds and temperaments, on and off the lead. I know how to create a captivating image, and I’m confident I can produce knockout images of the most important dogs in your life.

No matter the breed or temperament, I can nail the shot.

We still share our home with the lap-staffy and the naughty brindle camera ham. They’ve been joined by Trixie (a foster fail) and Bruno (also a foster fail, who I freely admit is my favourite) and we still foster, but with more success these days (they actually go to new homes instead of staying here!).

Ivan the Husky passed away in 2010, a few months shy of his twelfth birthday. The photos I took of him in the four years he was with us give us memories we’ll always treasure.

Since this photo was taken and this webpage was written our pack has changed considerably. We lost Trixie in Oct 2018 (there’s a memorial post here). A few months after Trixie passed we were fostering two Amstaff puppies and subsequently decided to adopt one (ooops!). His name is Peanut Butter and he’s non-stop entertainment – we have no regrets! Chopper and Angel passed away within two months of each other at the start of 2020. Their memorial posts are here and here. We were a two dog family for the first time in over a decade. When Bruno was 9 he underwent chemo for a mast cell tumor. He was in remission for some time but with no guarantees of how long he’d stay that way we decided to adopt our lockdown foster puppy, Ninja, so Butters would have a buddy when Bruno passed. Bruno was doing really well and made it to 12 years old but we lost him suddenly and unexpectedly on 08/01/23 – we don’t know the cause but take some comfort in the fact that he was happy until the end, died instantly and didn’t suffer. Easier for him, harder for us. I’ll write a memorial post when the tears have subsided enough to see the keyboard.

Run free my gorgeous Bruno. You’ll always be my favourite and I will forever cherish these photos of us together. 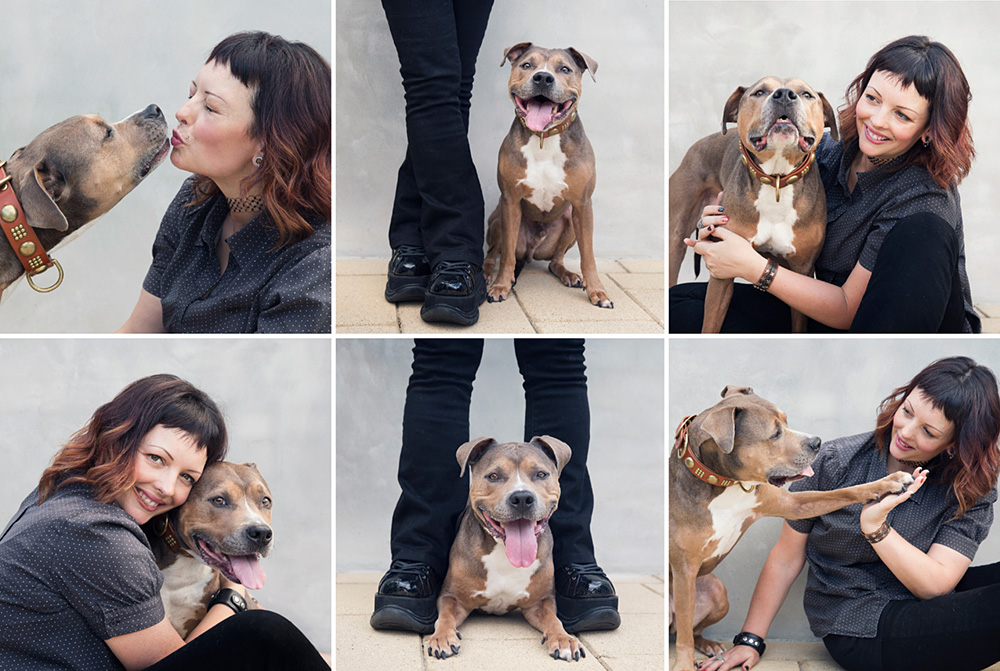 I’ve said it before and made a liar of myself but we’ll probably stick with just two dogs for the foreseeable future. Even though it’s totally off-brand for me to have such a normal amount of dogs! Butters and Ninja have their own Instagram account, you can follow them here.

With so many losses in such a short space of time the importance of capturing memories of our dogs regularly has never become more apparent to me. People often ask when is the best time to book a session? Now. Now is the best time. Whatever age they are there’s no better time than today. I’ve never had a client say they wish they’d waited but I’ve had lots say they wish they hadn’t.

I serve clients in Sydney and beyond, helping them remember everything they love about their pets, forever. Just your pet, crisp and perfectly lit, in studio or with nature’s best as a background.

your pet portraiture experience
enquire about a session 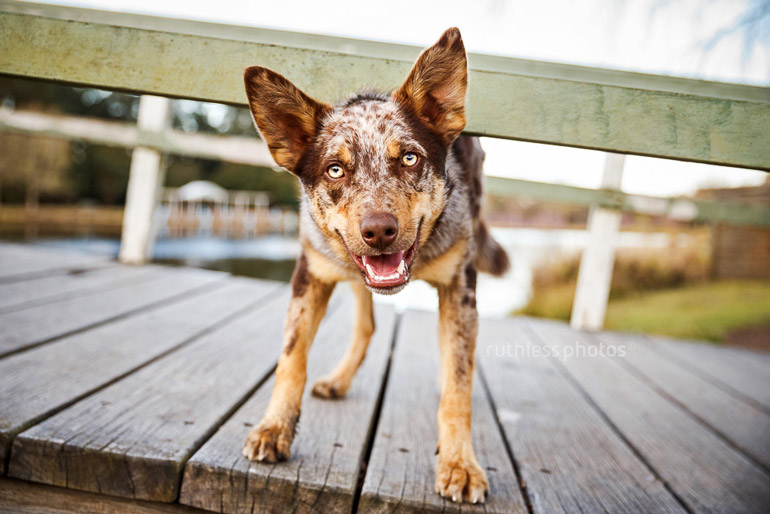 “I love that Ruth was able to capture Leo’s whole personality from his serious working dog face, to his fun playtime smile. I look at Leo’s album nearly every day and his canvas collection is hanging pride of place in our home, it always brings a smile to my face.” 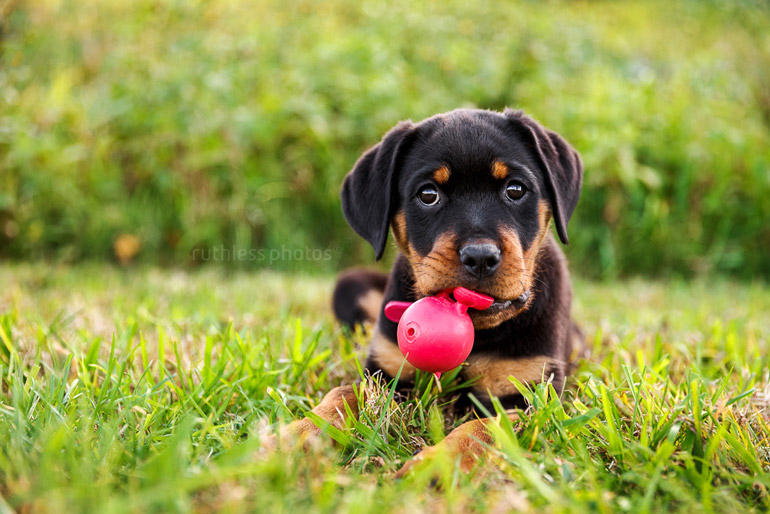 “I’d already experienced Ruth’s talent first-hand in a shoot with my other dog Archie, so when a new puppy came into my life it was a no-brainer to capture those fleeting puppy features with the best pet photographer in Australia. I thought I knew what to expect but when I saw Jet’s photos I was simply blown away.” 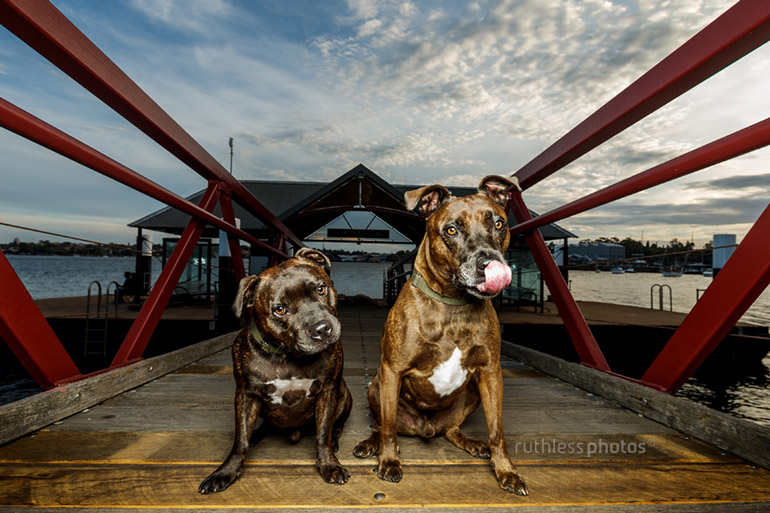 “Ruth is a very talented photographer who has artfully managed to take some amazing photos of Jake and Mack, despite their unwillingness to sit still. The large metal wall art piece takes pride of place in our lounge room, I admire it every day.”