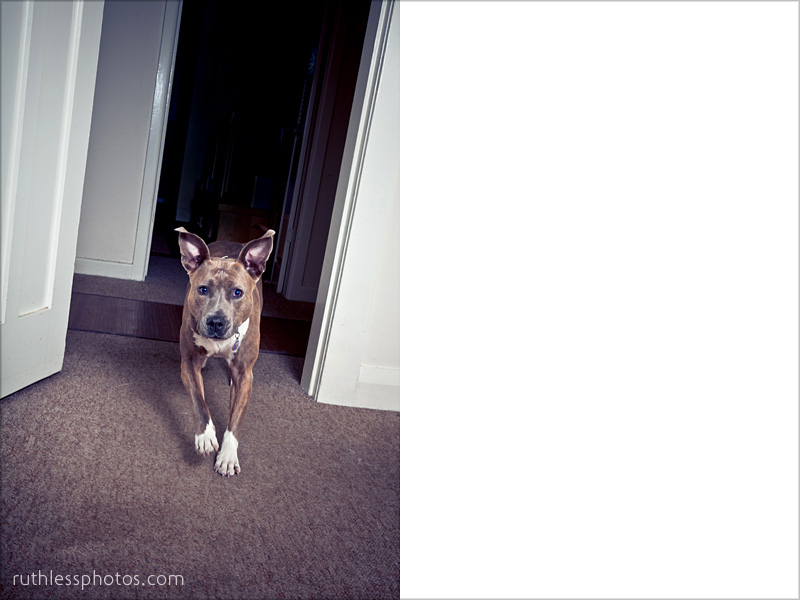 1. Trixie was our third foster
Chopper was dog #3 and our first foster failure. It took a long time for him to settle in. When we moved house and built runs I asked Dave if he wanted to try fostering again. I swore blind that I didn’t want four dogs, three was enough, no way would I suggest keeping a foster again! Handsome Eddie came and went within a week. Woohoo, our first fostering success. Then came Trixie!

At the pound she seemed sweet and calm. After quarantine at some rescue kennels for two weeks we brought her home and realised she was a really dominant, anti-social, handful of a dog. We felt it would be irresponsible to adopt her out. We’d learned a lot about dog behaviour and pack structure in the previous year and a half so we decided to keep her and attempt to rehabilitate her. Introducing a fourth dog to the pack really upset the apple cart. Myself and Dave were fighting all the time. The dogs were fighting and acting out. Loads of my friends told me to have her put to sleep cause she was nothing but trouble. I don’t believe in giving up on a dog because they’re difficult. A year and a half later, she’s by no means perfect, but she’s a very valued member of our family and we’re really happy we kept her.

3. Trixie’s weapon of choice is her bum
When she’s wrestling with the others she’ll whip around quickly and shove them out of the way with her bum. It’s hilarious. One day I’ll manage to photograph it!

4. Trixie likes to bring shame on me
Every morning I walk Trixie and Ivan for half an hour. We go the same route each time because I’ve found it to have the least amount of off lead or roaming dogs to contend with. We walk up the main street of my town and despite stopping at several green areas beforehand she saves up her pooh to deposit outside the busiest shop or café we pass. Thankfully her diet is such that I can pick it up with leaving any residue. It’s still pretty embarrassing though!

5. Trixie’s the other woman
She absolutely adores Dave. She flirts with him and gives him kisses and looks at him like he’s the only person in the room. I often find them spooning in the bed together!

6. Trixie has a masculine side
For such a pretty and feminine girl, she has a very deep and boy-dog-like “aroorooroo”! It always cracks us up!

7. Trixie has no table manners
When she’s eating, if her bowl is sliding across the floor she’ll just stick her foot in it and eat around it!

8. Trixie had a back lift
Earlier on in the year I found a lump on Trixie’s back. She’s prone to seasonal allergies, so I thought it was a hive. It didn’t go away and after a long period of observation we took her to the vet for a fine needle aspirate. The results came back inconclusive so we waited a bit longer to see if it went away or changed. It remained the same so we booked her in for surgery. The vet took huge margins [from her back fat!] and she now has a 7″ scar there. They tested the lump and found it was a Grade II Mass Cell Tumour. She’s healthy now, but we have to keep a close eye on her as they often return.

9. Trixie craves the sun
Our house is quite dark but I’ll often find her lying or standing in a trance in a shaft of sunlight.

10. Trixie’s favourite toy is Angel
The house became a no toy zone shortly after Trixie’s arrival. Herself and Angel like to pass the time playing bitey face!