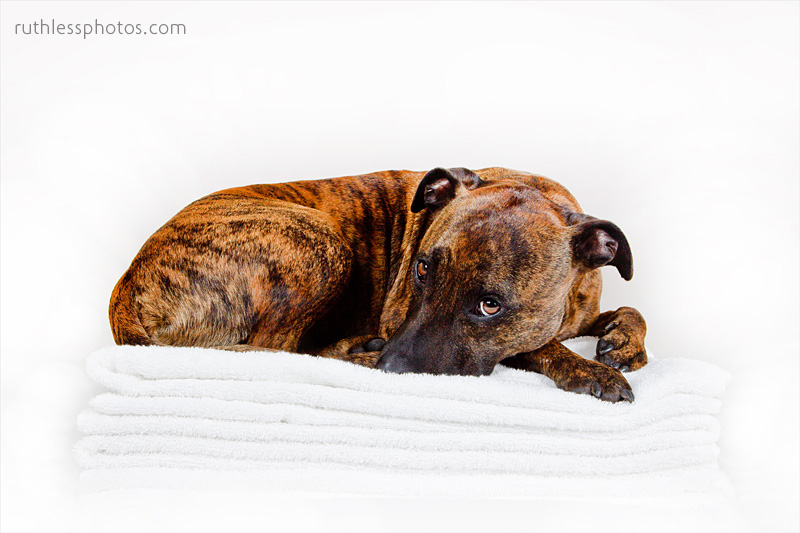 2. Chopper used to be called Bouncer
He was bought from a pet shop originally. His previous owner called him Bouncer. There was a Lab on Neighbours [an Australian soap opera] called that and there was no way I was owning a dog with the same name. I lost the fight about renaming Angel, Pixie, but I was standing firm on this issue! On his first night home we had a friend there and we were having a few drinks, he suggested Chopper and we agreed it suited him. I now wish we hadn’t. I don’t like tough dogs having tough names.

3. Chopper has been DNA tested
We’ve always thought that Chopper was a cross between a Staffordshire Bull Terrier and something else. At Pet Expo last year Dave bought a DNA testing kit for $115. We did the cheek swab and sent it off for testing. A week later the results came back. Chopper is a Staffordshire Bull Terrier crossed with an unknown cross breed. Money well spent I think you’ll agree!

4. Chopper has a licking obsession
It’s soooo annoying. The first thing he does when he walks up to anyone is try to lick them. If he can’t reach you he’ll lick the air. If you encourage him and get him excited he’ll take it a step further and try to bite your chin.

5. Chopper throws tantrums
Because he was such a difficult dog I had to take him to training every week. Now he thinks he’s the chosen one so if I go anywhere with one of the other dogs and not him he’ll throw a tantrum. He ripped a huge hole in his wire crate a few months ago when I took Trixie and Angel for a half hour walk. He’d been walked prior to them. Sigh.

6. Chopper can clear a room with his farts
Once he walked into my office, sat down beside me, farted, then smiled at me and started wagging his tail! Apparently farts are funny!

7. Chopper can make anything into a toy
Flip flops, door wedges, socks … they’re all fair game! He likes to run and get something to present you with when you walk in the door.

8. Chopper has several nicknames
Chops, ChopChop, Chopsy, baby Chopper, the dude, little man, the stripey one, the naughtiest one … I’m sure there’s more!

9. Chopper makes the best bed partner out of all our dogs
He’ll roll up into a tiny ball and not move or snore all night long. The three young ones sleep in crates at night. Sometimes Dave will sneak him into the bed at night and I won’t know he’s there until the next morning when he wakes me for his walk!

10. Chopper’s not my favourite
It’s a tie between him and Angel. They’re both my heart dogs 🙂

This is an outtake from the shoot. He didn’t quite understand what I wanted from him so he just gave up! 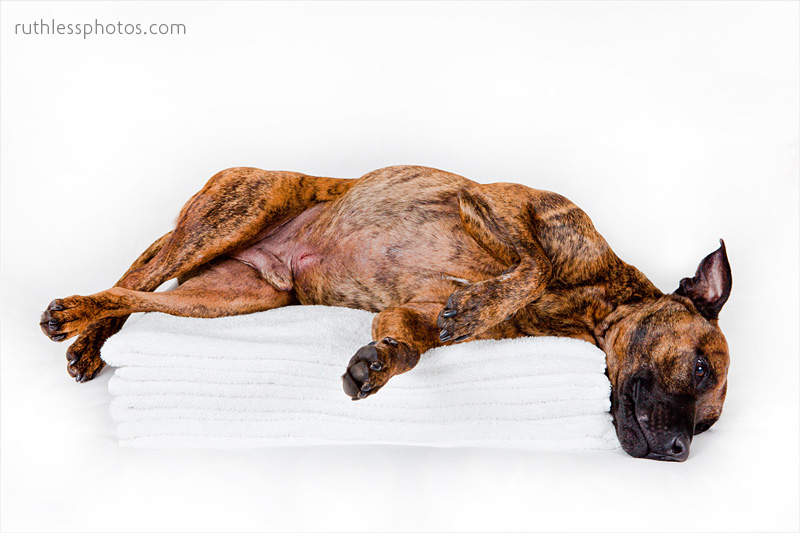 Baby Chopper was inspired by this photoshoot by my friend and mentor Kristin Anderson! Between now and Christmas she’s donating $1 to charity for every comment left on her blog, so subscribe to her feed today and leave her some love!!