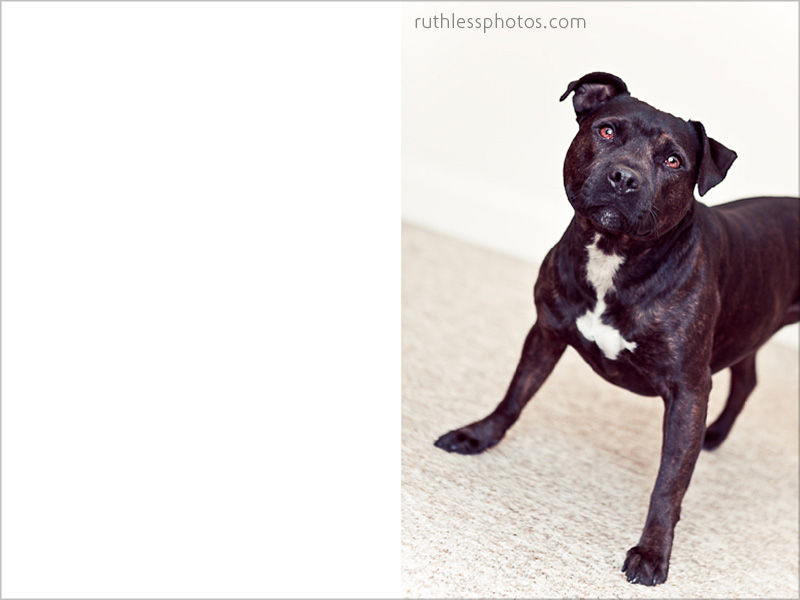 1. Angel thinks she’s in the army
She likes to drop one shoulder and do a commando roll and then jump up and look around to see if anyone was watching!

2. Angel is not an Angel
She came with the name. I wanted to change it to Pixie, but my husband thought it would confuse her to change it [even though she’d only been called Angel for one week!!!]. I feel like an absolute tool when I’m growling “Angel, behave” at her in the back garden or park. I’m sure anyone within earshot gets a chuckle. On her first day at obedience the instructor took a look at my name-tag and then a look at her and proclaimed “A Staffy called Angel? Was someone having a laugh?!”

3. Angel is bold, but not fearless
Angel’s afraid of leaving the house, storms and plastic bags.

4. Angel breaks Ivan’s heart
She’s always tormenting him, biting his ankles and jumping in his face. She’s the only dog that really tries to play with him. Maybe because for a while there was only the two of them. We got her as company for him, I think he wishes we hadn’t!

5. Angel is not fun to play fetch with
She loves squeaky balls. If I show her one she’ll do backflips to get across the road to the park to chase it – apparently going outside isn’t scary if there’s a squeaky ball! If I take both her and Chopper she’ll run flat out and on the rare occasion that she gets to it first she’ll bring it most of the way back and then lie down with her back to everyone and chew on the ball so it squeaks repeatedly. Chopper paces around her and she’ll keep turning her back to him. When she’s had enough she’ll get up and let him bring it back to me to throw again. If I bring her to the park on her own she won’t chase it because it’s only fun when there’s competition. She used to decide she’d had enough so she’d take the ball and run home. The last time she did it I put her in her run and went back out with just Chopper for 20 mins. She didn’t do it again after that!

6. Angel had an abortion
After the rescue group got her from the pound they took her to be desexed. When the vet opened her up they found she was pregnant and aborted the litter.

7. Angel’s not housetrained
She’s approximately five years old and she’ll still pee on the carpet if we’re not careful. We have to watch her like a hawk, especially if it’s raining and princess doesn’t want to get her toes wet!

9a. Angel is a social butterfly
Angel can’t be left unsupervised for long periods in the garden. If she gets bored she tunnels under the fence to go and visit the neighbours. She used to do it at our last house too.

9b. Angel tiptoes
If we put her in her crate [with the door open] when we’re eating, as soon as she hears the cutlery go down for the last time she’ll start slowly tiptoeing into the room. When you look at her her tail starts wagging madly and she’s so full of anticipation that she’s almost bursting. It’s GOLD!!

10. Angel’s awesome
I just have to look at her and she makes me smile. She’s always lying nearby and when I look at her she does a little kick with her back leg and the tail starts wagging. She’s a total nutjob on so many levels and she’s naughty as all hell, but I love her to bits and I wouldn’t change a thing about her.