Back in 2013 I photographed a very beautiful and extremely well trained Border Collie named Kyna. Hers was my first ever shoot in Sydney city, she introduced me to areas I’d never seen before. She very sadly passed away the following year but one of my photos has been tattooed onto her owner’s leg so she’ll always be remembered.

Fast forward to 2016, I launched my Tails of Sydney book applications and received one from Kyna’s owner, a foster carer for one of the groups the project has supported, for her two Border Collies, Keely and Gryffin. I replied straight away with a resounding yes … please!

Much like with Kyna’s shoot we struggled with scheduling due to bad weather. The end of the project was drawing near and time was of the essence so we ended up having to shoot verrry early on a cold Spring morning. We met at Victoria Park, just as the rats were finished foraging for the night (GROSS) while the grass was still wet from the recent rainfall. The dogs didn’t care though, they were just happy to be out and about with their ball. 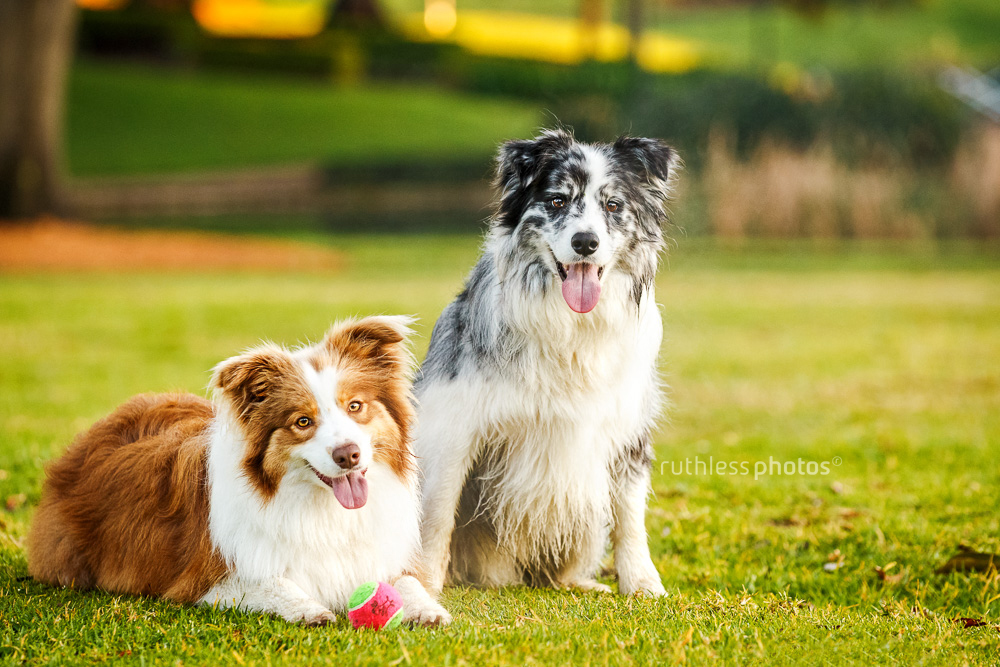 You can see the steam on Keely’s breath. I could have done with a big fur coat like hers that day. 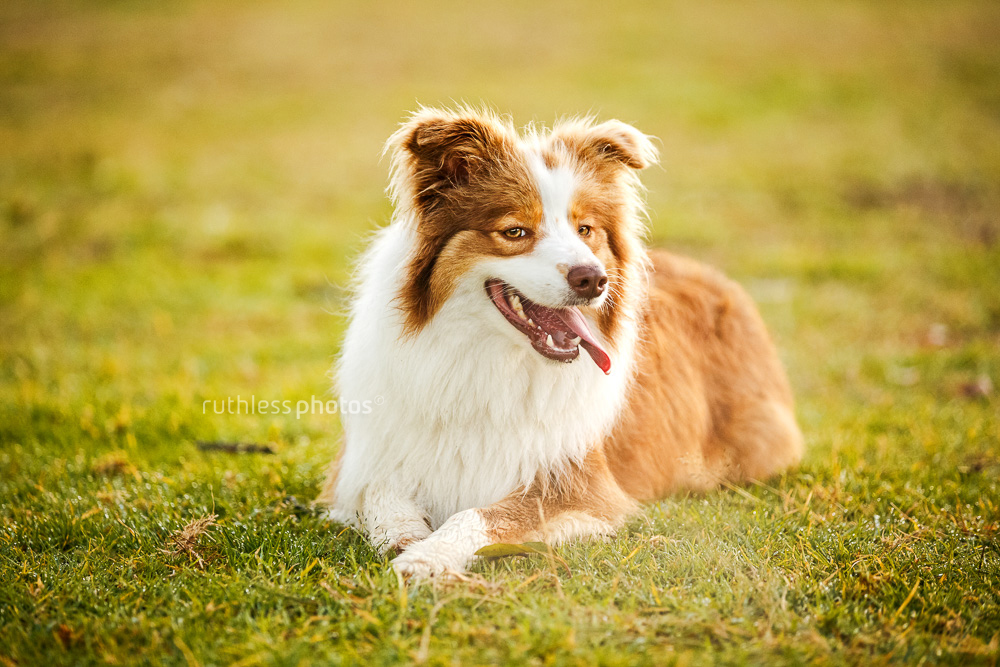 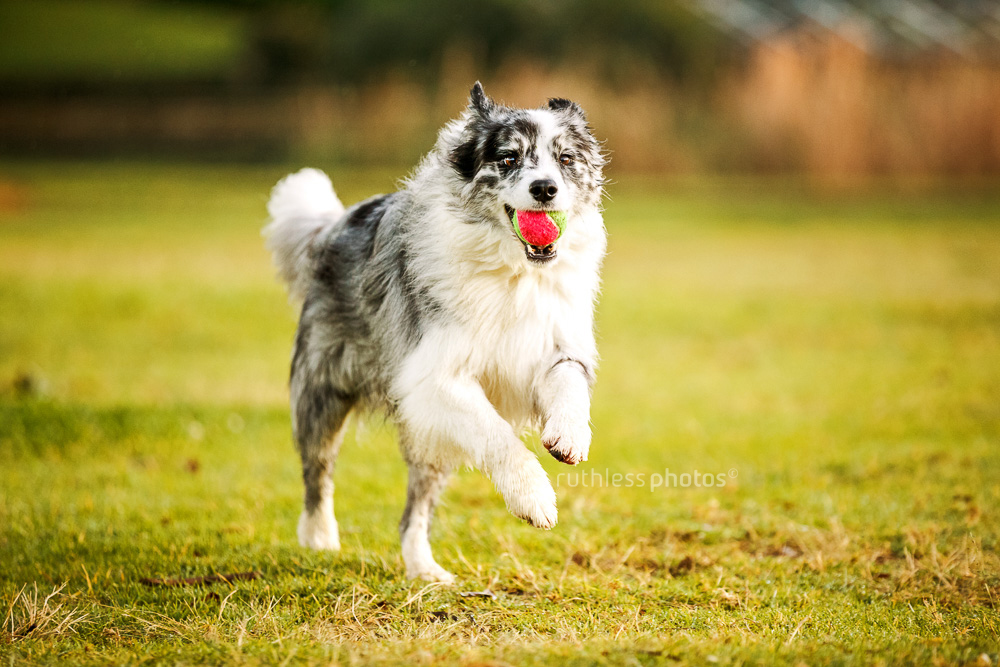 Are these not two of the most photogenic dogs you’ve ever seen? Behind them you can see the lake which is the centrepiece of the park. We did well to keep the water-loving dogs out of it that morning! 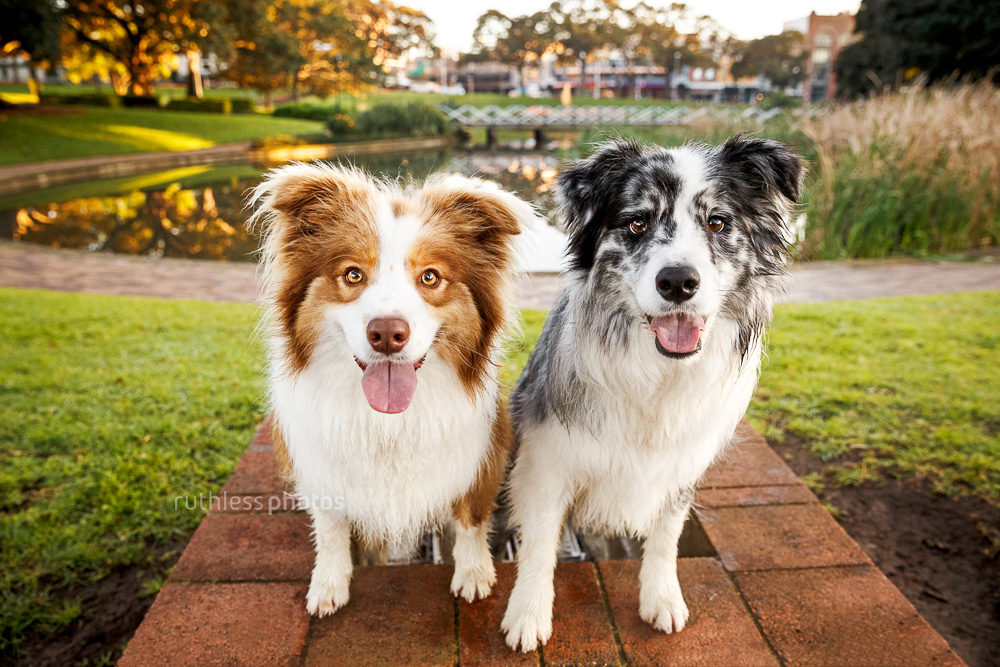 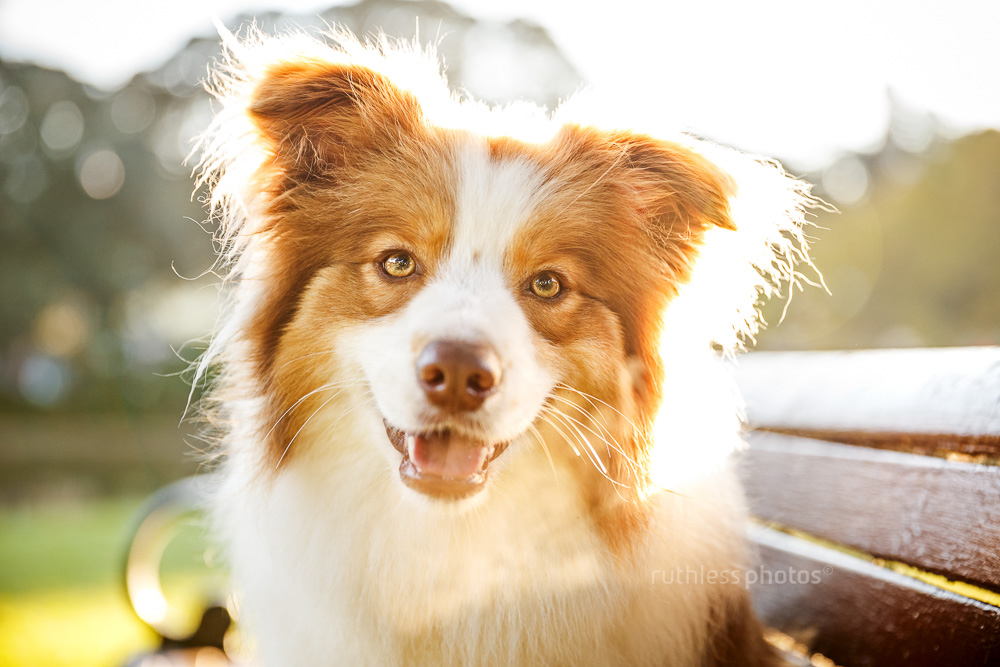 I wonder if Kyna taught Gryf how to head tilt like a pro? 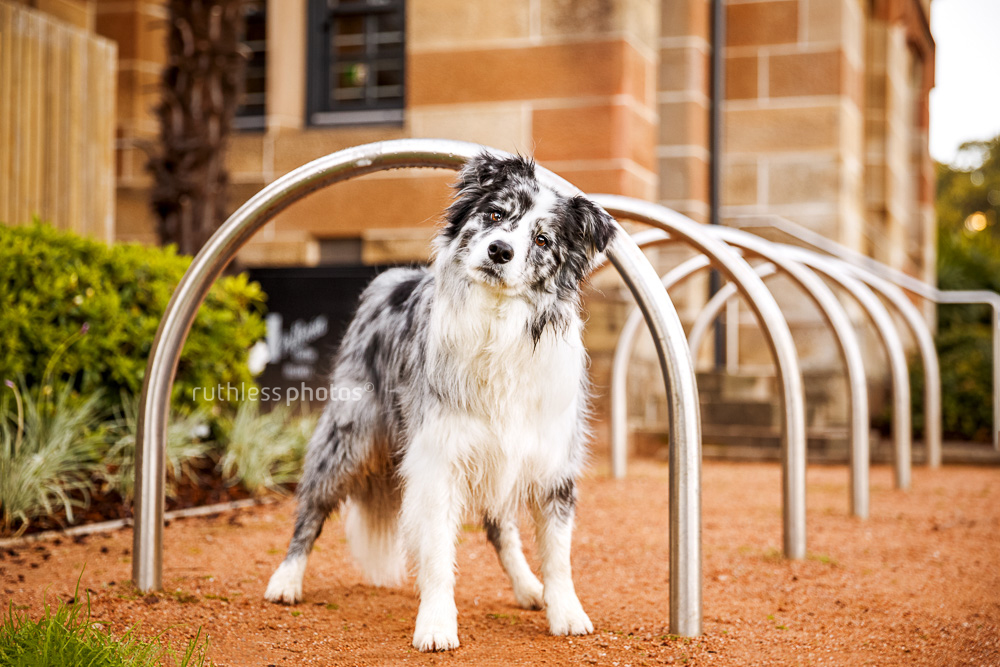 I love this image of them sitting on the bridge together. The steps behind them leads up to the quadrangle where the gorgeous jacaranda tree still stood. It fell down the night before my shoot at Sydney University, what were the odds?! 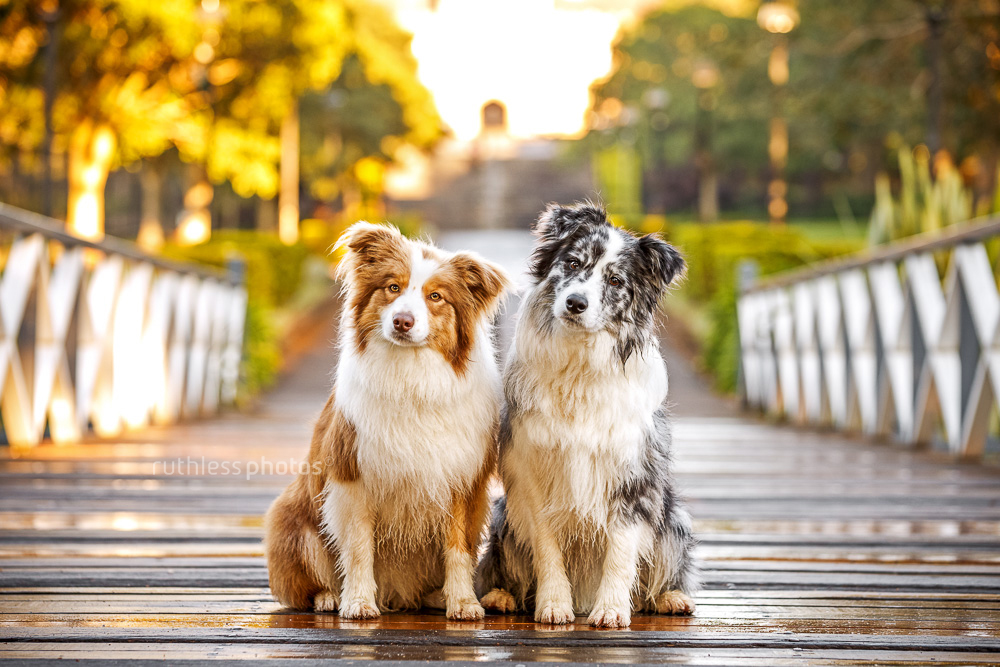 The morning commuters on City Road were very interested in who these “famous” dogs were. Apparently only famous dogs would be having their photos taken by a professional. Au contraire, all my subjects are made to feel like celebrities dahling! 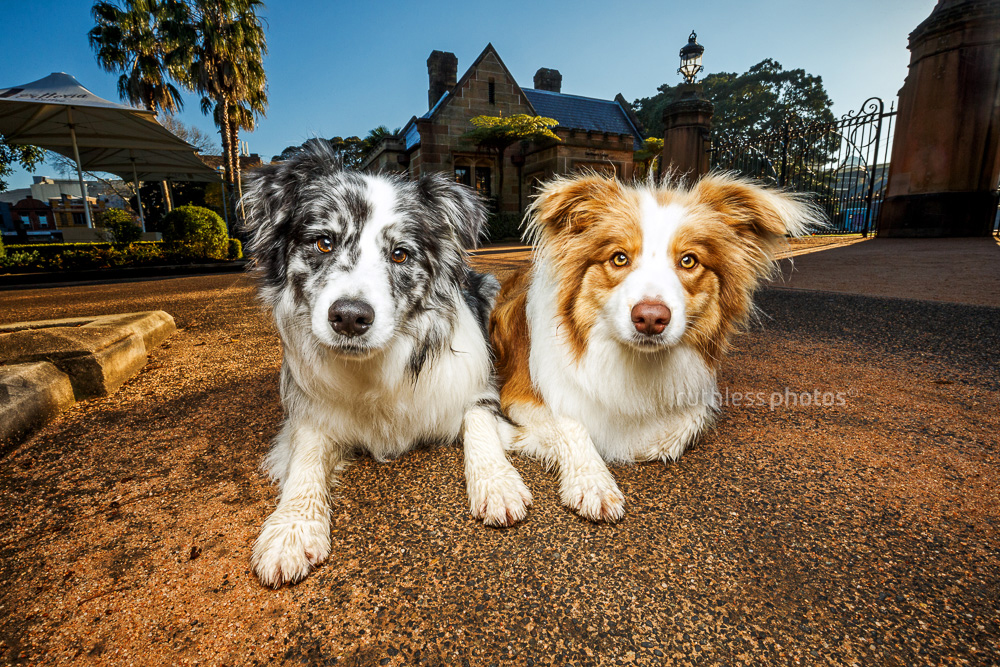 When your big brother loses your favourite ball you’re well within your rights to make him your toy! 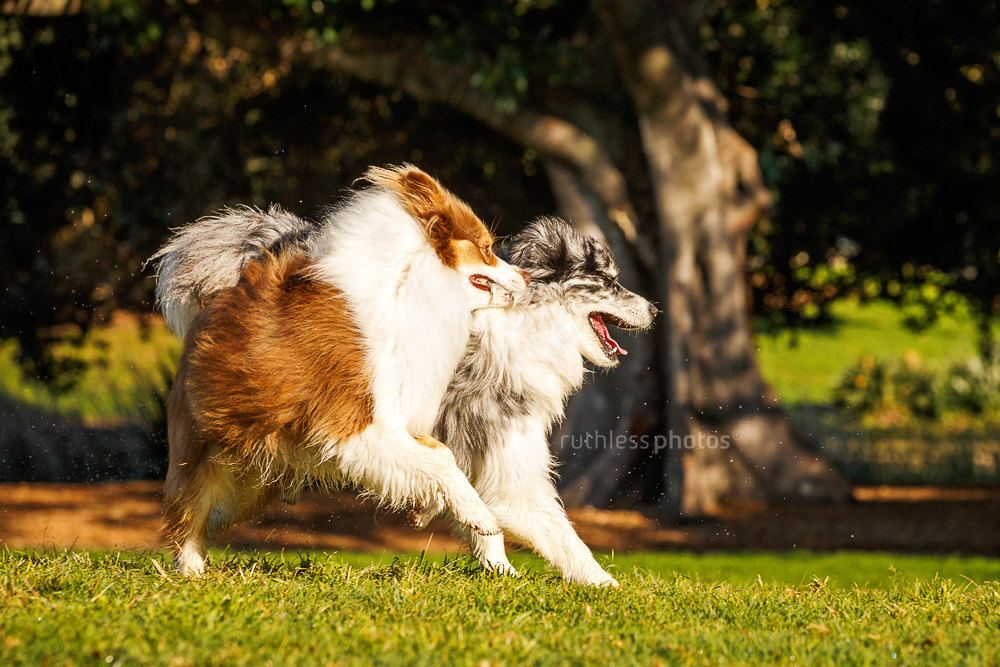 Keely and Gryffin’s people ordered a package that includes wall art, digital files and an album. The wall art will join the canvas of Kyna from the session I had with her in 2013. There’s a flip through of the album on my Instagram feed if you’d like to check it out.

If you’d like to read more about Victoria Park (and 84 other locations) you can pick yourself up a copy of Tails of Sydney from my online store or from Rupert&Dora in Paddington.