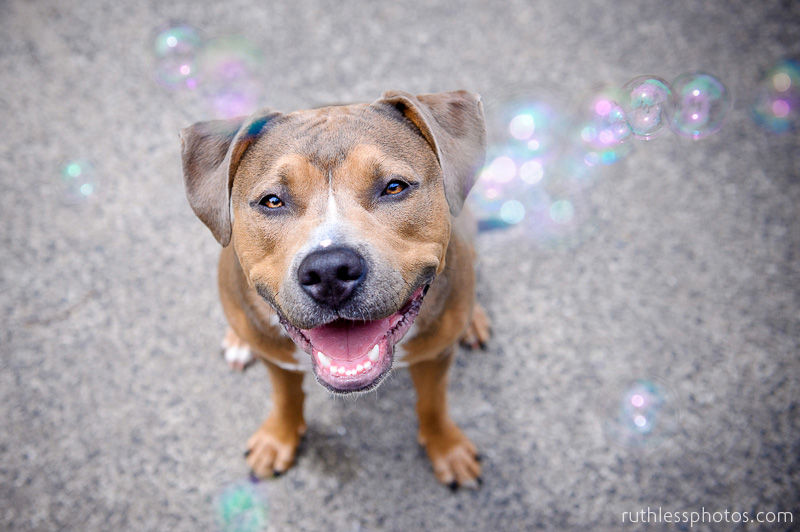 Since I’ve done ten facts about all my other dogs I thought it was about time I did Bruno.

1. Bruno is foster #4 and foster failure #3
Technically I kind of knew he was never going anywhere, but I had to tell Dave he was a foster until he fell in love with him too. I broke the news to him in Ireland after several tequilas but I did promise that if he didn’t fit into the pack I wouldn’t insist on keeping him. Luckily he fitted in way better than I ever could have imagined.

2. Bruno’s a lover not a fighter
If you were walking your dog towards us in the street you’d be forgiven for thinking that Bruno is another one of those dogs. But the screaming and lunging isn’t aggression, he just REALLY wants to play with every dog he meets. We’ve had him about six months now and I think he’s improving, slowly but surely – the screaming has turned into a whimper and the lunging is more like a happy dance!

3. Bruno’s another contender for the army
Angel may have perfected the commando roll, but Bruno’s an expert at the commando crawl! Until I stop thinking it’s cute and funny I don’t think we’ll ever be able to compete in an obedience trial – he adds a crawl to all his drop stays.

4. Bruno’s part rabbit
He LOVES carrots. He’ll stalk me if I’m eating one and will persist until I give him a piece. It’s a pain in the ass because then I have to give the other three a piece too [in the name of equality] but they only half eat theirs and leave a right mess for me to clean up!

5. Bruno had an owner
I found out a couple of months after we rescued Bruno [and his sister Juno] from the pound that their owner knew they were there. He was on holidays and his friend was supposed to collect them but no one ever came. I know that Renbury Farm would have made numerous attempts to reunite them so I don’t feel bad. Obviously he didn’t love them, so they’re both in a better place now. His loss.

6. Bruno doesn’t need expensive toys
The most high value toy for him is a sock. He knows not to steal them though, cause he’s a good boy… mostly!

7. Rude boy
Poor Bruno loves nothing more than to play, but the vast majority of dogs he’s met have taken an instant dislike to him. We think he wasn’t socialised as a pup because his doggy manners are terrible. His greeting is to run straight at them and jump in their face while trying to play biteyface! He really is an acquired taste. Luckily my dogs like him and he has a few buddies that don’t mind playing rough, so he does get to go on dates occasionally.

8. Bruno the redecorator
We don’t know what the hell he gets up to when we go out and leave him in his dog run, but when we get home it looks like a freak tornado has passed through there! The first day that he was given a paddling pool he kindly pulled his blanket out of the kennel and put it in the pool and then dragged his trampoline bed over and put the back legs of it in the water too. I wish we had surveillance cameras down there. I bet Bruno TV would be quite a hit!

9. Bruno’s a model dontchaknow?
Only a matter of weeks out of the pound and his stage Mom [me!] had already lined him up a gig as the cover star of Urban Animal Magazine. He was so good at his shoot, working the camera like a pro. I knew then that I’d picked a keeper for sure!

10. Bruno the clown
There are so many things to love about Bruno, but the main one is the fact that he makes us laugh allllll the time. He’s comedy gold! One of my favourite things that he does, because I know he does it purely to make me laugh, is his squishy crate face. If he’s put in his crate in the back of the car and we stand around talking before driving off, he’ll stick his face up against the bars with a deadpan expression and then slide down so he’s got a pig nose and his teeth are showing. It’s too funny!

This is the first photo of my 52 weeks of Bruno project. I never finished Chopper’s 52 weeks and he’s the good model, so time will tell if this projects suffers the same fate!